Multitasking is a popular concept that has come to characterize life these days. Simply defined, multitasking refers to dealing with multiple tasks at the same time.
The above quote comes from William Penn, founder of the Pennsylvania colony. It appeared in his 1682 collection of epitaphs titled Some Fruits of Solitude In Reflections And Maxims; If time management was an issue in his day, think how much more relevant this statement is today!
The majority of people are juggling numerous demands on their time and energy every day. Most of us have access to many of the wonders of modern technology. You're, no doubt, reading this page on such a device right now. These devices are designed to make it easier for us to accomplish more with less effort. While this is certainly the case, it is also true that they can and do bombard us with a constant stream of distractions. Learning to sift through the distractions and focus on what is most important in the moment is the challenge of our day.

Being occupied with a task and being productive are not the same thing. There is a notion in society that the more tasks a person can juggle simultaneously, the more competent and successful the person. But is this actually true? Ample evidence exists to suggest otherwise. Let's look a little closer at some of the many myths of multitasking that are commonly touted in Western culture.

Myth #1:
​It is possible to concentrate on more than one thing at a time

It is actually impossible to multitask. The human brain is designed to do one thing at a time. When we think we are multitasking, we are really task switching, or toggling back and forth between tasks very quickly, rapidly shifting our focus from one thing to another.

Psychologist, author, and science journalist Daniel Goleman said the following regarding the notion of multitasking in his book Focus: The Hidden Driver of Excellence (affiliate link):​
​When we’re not fully engaged in what we’re doing, we make mistakes and miss things.  To learn more about the drain on your brain that is task switching, check out this article by Susan Weinschenk, Ph.D. at Psychology Today titled The True Cost of Multitasking.
While the term multitasking is relatively new, the concept of doing more than one thing simultaneously is by no means new. To some extent multitasking has always existed and it always will. If you are a parent, you’re going to have to supervise homework while making dinner, or referee fighting kids while driving, or hold and soothe a baby while attempting to do any number of other tasks. There’s really no getting around those kinds of things. Cooking, for example, is an exercise in multitasking. Imagine trying to cook a Thanksgiving dinner without doing more than one thing at a time. It’s practically impossible.

In many ways juggling multiple tasks at a time is just a part of life. However… 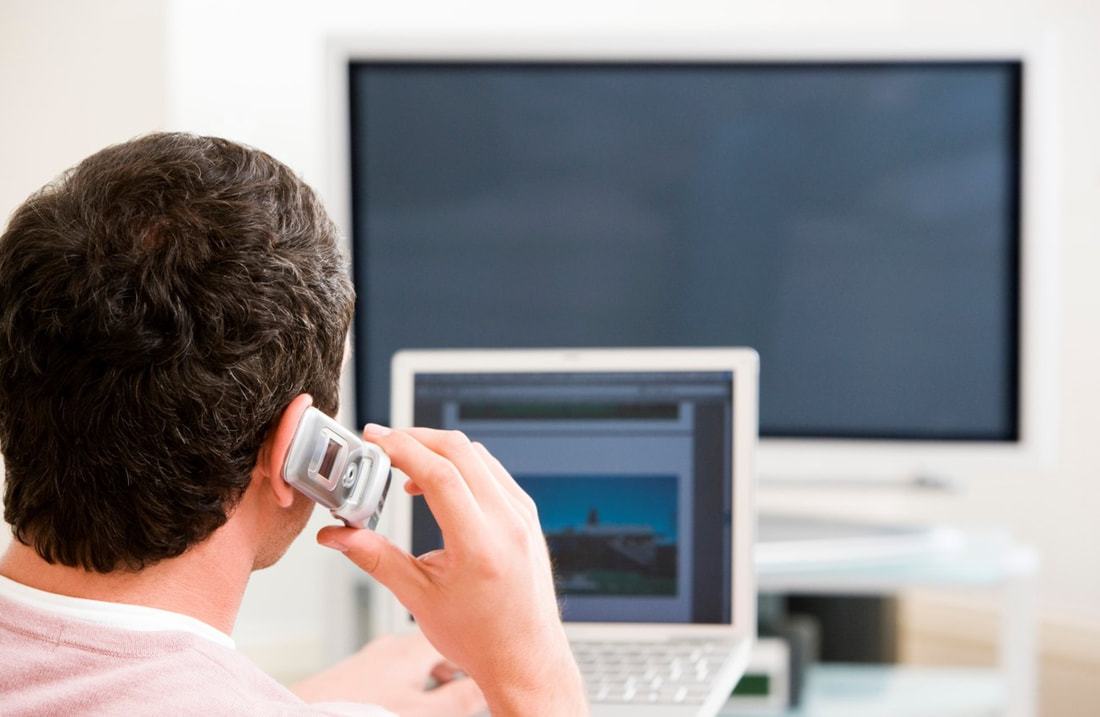 There is a new form of multitasking that has arisen in the past 10 – 15 years. When people, particularly researchers, talk about multitasking this is what they are referring to: multitasking with media. It’s the use of one or more electronic devices at the same time that you’re doing something else (like texting while cooking dinner or responding to emails while in a meeting). It can also refer to the use of multiple devices simultaneously such as we see the man in the above picture doing – he’s on the computer; he’s talking on the phone, and there is a TV in the foreground which may or may not be on as well.  Another form of media multitasking is working on several different things at once on the same device. An example would be having your email open while you’re watching a video, checking Facebook, researching something for work, etc..

​We will see why this is not the best idea. 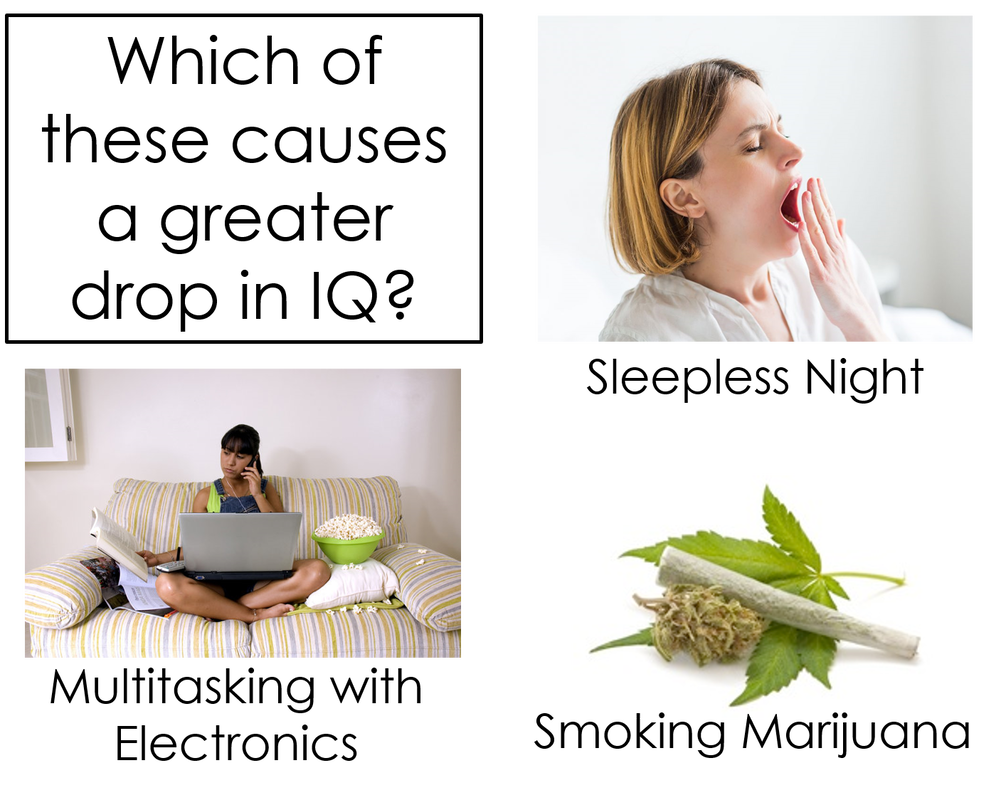 The Institute of Psychiatry at the University of London studied 1100 workers at a British company.  Researchers found that multitasking with electronic media causes a temporary decrease in IQ of up to 15 points. That’s a larger drop than occurs as a result of skipping a night’s sleep or smoking Marijuana. What’s more, this loss drops most adults down into the IQ range of an 8-year-old child.

​The results of this study are particularly applicable to today's teens who are convinced that they can watch a video or listen to music or text their friends (or maybe all of the above) while doing their homework. Abundant research exists now to confirm that this is an ineffective way to learn or work.

The reason is that frequently switching between mental tasks overloads the brain causing mental fatigue. A fatigued brain is obviously less effective.  What's more, these mental gymnastics cause the brain to release cortisol, a stress hormone, and stress has a negative impact on IQ.  According to Sandra Bond Chapman, director of the Center for Brain Health, evidence suggests that increased levels of cortisol can actually damage the memory region of the brain. 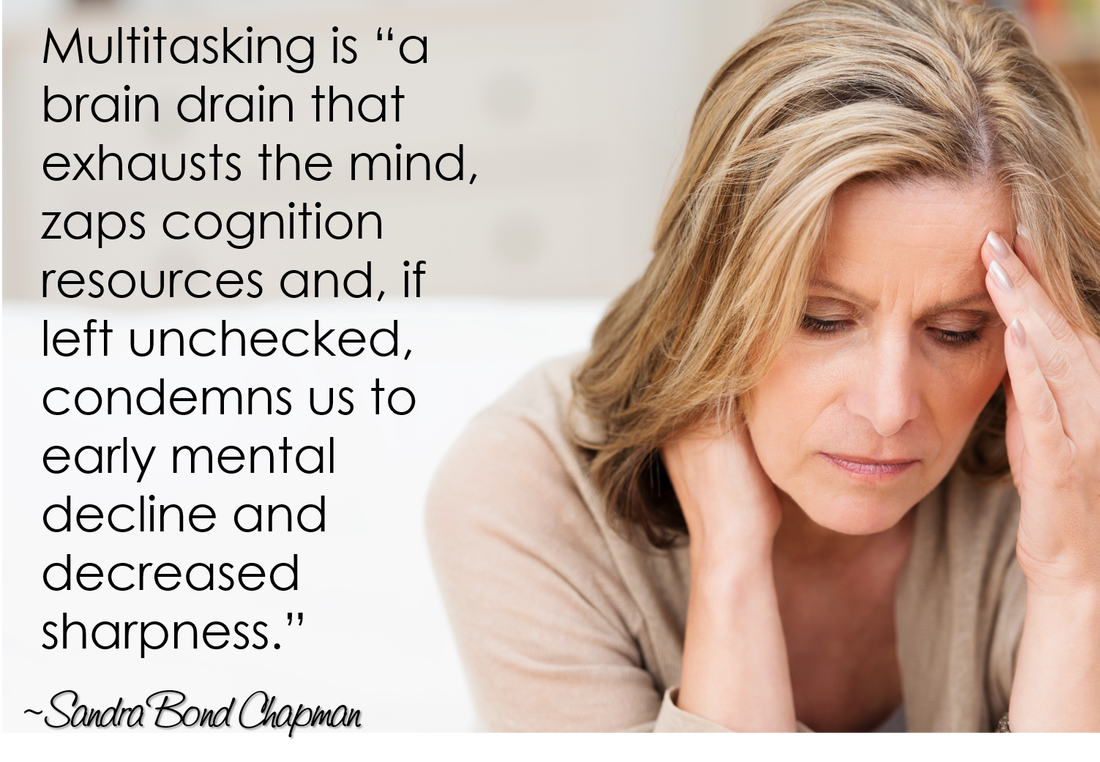 For more information on the effects of multitasking on IQ, check out Relly Nadler's Psychology Today article titled "Where Did My IQ Go?".

Stanford researcher Clifford Nass looked extensively at the relationship between multitasking and cognitive functioning. He understood that multitasking was not actually possible for the human brain, but he theorized that people who do a great deal of so-called multitasking might be good at certain executive brain functions like filtering information, switching between tasks quickly, or maintaining a high working memory. To his surprise, he found the opposite to be true. He said this about his research, "We were absolutely shocked. We all lost our bets. It turns out multitaskers are terrible at every aspect of multitasking."

To learn more about his research, click here or here, or listen to a TedTalk he gave.
In other research at Michigan State University, test subjects were asked to remember exactly where they were in a precise sequence of computer tasks. Volunteers were repeatedly bombarded with pop-up boxes that required them to enter a code in order to close the box. ​In the first test, the length of the distractions subjects had to deal with was less than 3 seconds, but the number of errors subjects committed immediately following the interruption doubled.  When the interruptions were just over 4 seconds in length, the number of errors more than tripled.

Clearly, multitasking has a negative impact on a variety of brain functions. In fact, researchers believe that multitasking can actually reduce a person's productivity by as much as 40%!

Myth #4
​There is No Harm in Multitasking

Abundant evidence is now available to demonstrate that multitasking with media actually rewires a person's brain in negative ways, making it harder to process and retain information. Shape.com offers a variety of interesting articles on this topic. For more insight, check out: Multitasking with Technology Can Rewire Your Brain, Are You Too Attached to Your iPhone?, Your Cell Phone Is Ruining Your Downtime, Your Brain On: Your iPhone.

The potential adverse effects of multitasking extend beyond the intellectual to include physical dangers as well. One of the most common forms of multitasking is driving while talking on the phone. University of Utah professor David Strayer found that talking on the phone while driving a car is as dangerous as driving while intoxicated. Reaction and attention decrease to such a degree that drivers miss half the things they would normally notice – things they should notice like road signs and pedestrians.

Last year my husband was struck by a car while riding his bike home from work. The woman who hit him was almost certainly texting while driving, an obviously dangerous form of multitasking. Thankfully, his injuries were not life threatening, but more than a year and a half later he is still suffering as a result and requires a second surgery as a direct result of the accident. 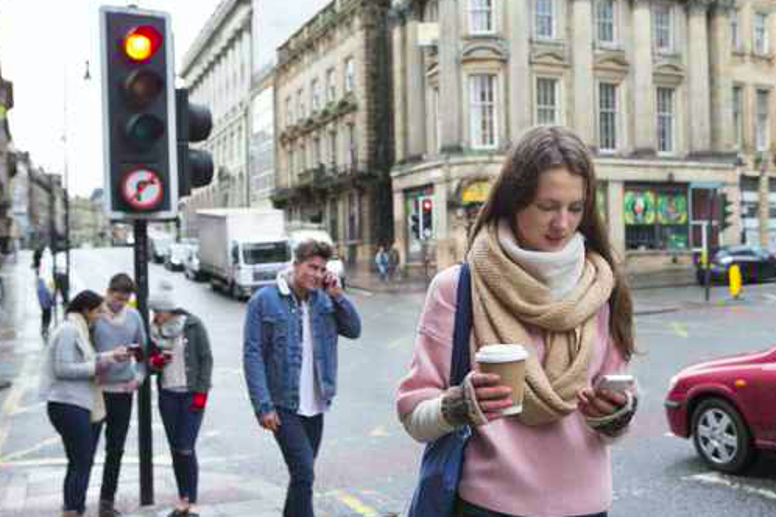 The phrase: "Watch where you’re going!" is frequently heard in movies and TV shows as some frenzied individual barges into the street while running from danger or chasing a bad guy. Studies indicate that it’s something we should all think about saying when we see people engaging in activities like the ones depicted in the above photo.

Distracted walking is an actual term that doctors, lawyers, and insurance providers use to describe accidents that occur when a person is injured while texting and walking. People regularly walk into things including traffic, and the number of accidents (many fatal) that result has risen dramatically with the rise in cell phone use. People have fallen onto the subway tracks because they were texting and walking. Enough people have been hit by cars while texting and walking that a debate has arisen as to who is responsible for an accident when a car hits a person who is walking and texting at the same time.

Myth #5:
Women Are Better at Multitasking Than Men

For every study that seems to conclude that women are better at multitasking than men, there is another study that is inconclusive. There are also studies that seem to indicate that men are actually better at multitasking than women. Whichever gender a study seems to favor, the difference is consistently minimal at best. While researchers can't seem to come to a solid conclusion as to which gender is better at multitasking, there is one thing they all agree on: neither gender is actually good at it.
I began by defining multitasking as dealing with multiple tasks at the same time. It might be better defined as screwing up several things at once. I have barely touched on the myriad evidence which indicates that multitasking is ineffective, has adverse impacts on a variety of mental functions, and is thoroughly unsuccessful. I'd like to conclude by talking just a little about what research indicates actually promotes productivity.

Georgetown Professor Cal Newport believes two things: 1) Deep thinking is critical to long term success (both academically and professionally), and 2) as a society we are literally losing our ability to focus deeply on cognitive tasks. Learn more about his research here. 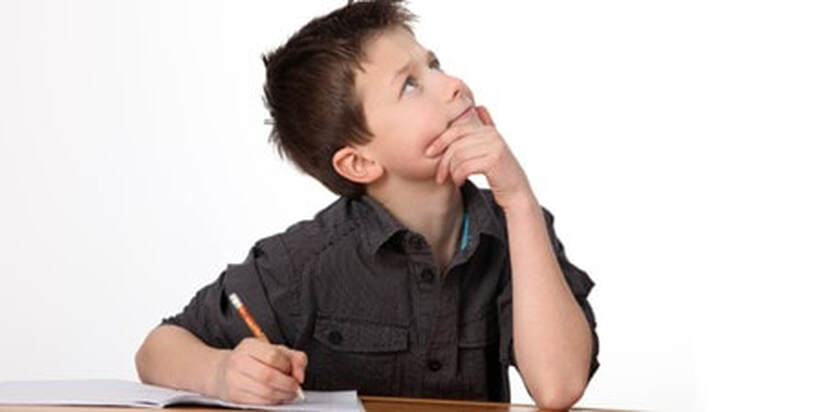 Professor Newport is not alone in his theory with regard to the importance of deep thinking. A study tested children born in 1972 and 1973 regularly for eight years, measuring their ability to pay attention and to ignore distractions. Then, the researchers tracked those same children down at the age of 32 to see how well they fared in life. The ability to concentrate was the strongest predictor of success. According to Daniel Goleman, author of Focus: The Hidden Driver of Excellence, "This ability was more important than IQ or the socioeconomic status of the family you grew up in for determining career success, financial success and health…” ​

So there you have it. Focus is critical to success, and multitasking is the opposite of focus. Not only does it interfere with our ability to concentrate on a given thing when we're doing it, but it rewires our brains in ways that make it harder to be able to focus period Many people (including members of my own family) mistakenly believe that they need 'distractions' in the form of various types of media stimulation in order to be able to concentrate, but this simply is not the case. 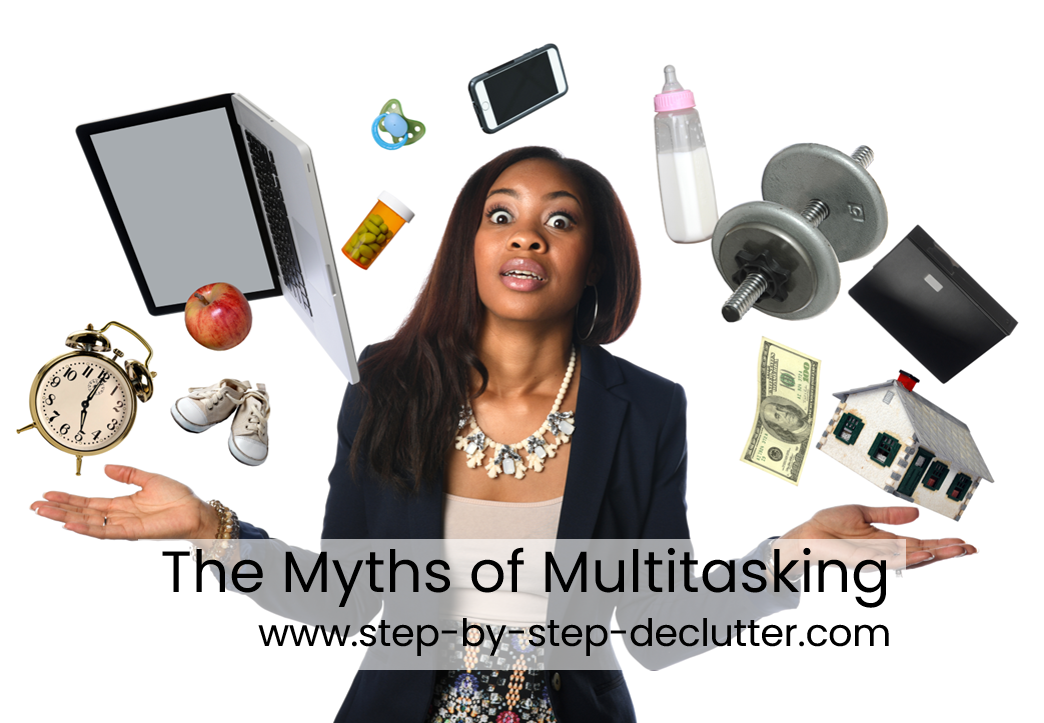