A few simple rules for decluttering can make a huge difference in the battle against clutter. I doubt any of them will come as a surprise to you. You’ve probably heard them before in some form. The magic is in the consistent application of these basic principles of home organization.
As far as I’m concerned this may be the most important of the rules for decluttering. I can’t stress enough the importance of having a place for everything. When things don’t have a home of their own they start to pile up, creating clutter.  The essence of organization is the application of this rule.
Among the rules for decluttering, this is the one most often touted by parents and rightly so. It is an effective way to control clutter. It’s simple. It’s straightforward. It yields results.
The more stuff that gets left out, the more clutter you have. Put clutter in its place by putting things away.
As far as rules for decluttering go, this one is not (in my opinion) universal.  I recognize that there are things that are necessary that are used infrequently. For instance, perhaps you own a power generator but you haven’t used it in a couple of years because you haven’t had a power outage. Count your blessings and keep the generator. The value (in this case) is in the insurance that it provides, not in its regular use.
That said, this rule does apply nicely to frequently used items like clothing and household items. If you’re reluctant to part unconditionally with something that hasn’t been used in months or years, try placing it in a ‘to get rid of’' box and setting it out of the way for a month or so. If you don’t miss it during that time, you can feel good about letting it go.
Purging is one of the most essential of the rules for decluttering. If you’ve lived in your home for 10, 20, 30 years or more without purging, the idea of sorting through all of the acquired stuff can be intimidating, if not completely overwhelming.  Recruit some friends or consider hiring a professional organizer to assist you in the task. It’s well worth the effort (and even the expense).

You will be amazed at the power of purging! It’s cleansing – not only physically, but also mentally and emotionally. It’s refreshing. It’s rejuvenating. It’s truly awesome!

Once you’ve streamlined, your work is not done. In order to be effective, purging needs to be an ongoing process. Establish a regular routine of clearing out the unnecessary, unwanted, unused stuff that has a habit of accumulating over time. Train yourself to evaluate things as you encounter them. Set aside those items that don’t measure up in a donation box, and take it to a local charity once it’s full.
For more information on the purging process, click on the image below. 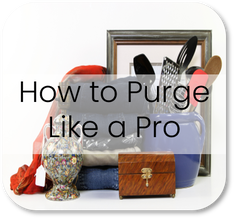 This is one of my favorite rules for decluttering because it’s so easy to implement and so frequently violated. If it’s faded, broken, stained, worn out or missing parts, get rid of it. People have a tendency to hold onto things that have lost their value or usefulness in the vain hope of restoring them to their former glory. It’s not going to happen. Hold a brief moment of silence in honor of the much loved but no longer useful item and move on with your life rejoicing in the clutter you’ve cleared away.
Here’s a no-brainer: give back stuff that doesn’t belong to you. Why let other people’s stuff clutter your house?  If someone forgets something at your house, take it to them. If you borrow something, give it back. ​Don’t let stuff you don’t even own stake a claim on your space.
​
Often people mean to give stuff back, but they forget. Try establishing a designated space in your home, preferably near the most frequently used exit, where you can temporarily stow stuff that needs to be returned. Then make a habit of taking it with you when you walk out the door and delivering it to its rightful owner.
You know you’re guilty of violating this rule. I know I am. It happens when you know something shouldn’t be where it is, but you’re not exactly sure where it belongs. Instead of finding it a permanent home, you simply move it to a new, slightly less conspicuous but still inappropriate location.  If you’re going to take the time to move whatever it is (and you should), take the time to find it a proper home (see Rule #1). 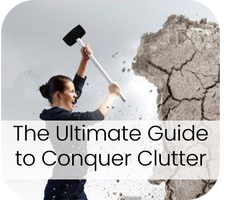 This is one of the most frequently proclaimed rules for decluttering. It is the idea that every time you bring something new into your home, something old needs to be removed. In recommending this methodology, I am not suggesting you wander around your home looking for something to toss out every time you make a purchase.
​
What I like is the principle behind the precedent. Simply put, we should all be seeking for balance when it comes to material possessions. We should be seeking to control clutter rather than succumbing to it. We should think before we buy and regularly take stock of what we own, passing on that which is no longer wanted, needed or appreciated. We can be the master of all that we own.
William Morris, an English textile designer associated with the British Arts and Crafts movement, said this:
Have nothing in your house that you do not know to be useful or believe to be beautiful.

Amen. Could there be a better ‘test’ for identifying clutter? I don’t think so. If all that you own is either useful or beautiful to you, yours will be a home where balance and harmony reign.
Try implementing the rules for decluttering in your quest for a clutter-free existence.